The Fifth Fundamental of the Way of Adidam

In the Way of Adidam, Spiritual Realization is a Gift freely Given by Avatar Adi Da Samraj. Avatar Adi Da’s Divine Spiritual Transmission Enters the conditional world from Above and Beyond, Infusing and Transforming all that appears. 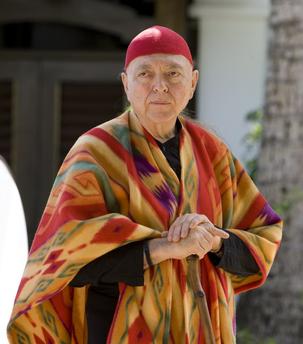 The fifth fundamental of the Way of Adidam is the process that unfolds on the basis of the fully established devotional and Spiritual relationship with Avatar Adi Da. It is a unique Yoga, because of the unique Avataric nature of Adi Da’s Ruchira Shaktipat.

The Ultimate Process of Divine Enlightenment:

context of Consciousness Itself. The “Perfect Practice” progresses through three stages. For each of these stages, Avatar Adi Da has Given a brief Admonition that epitomizes the essence of practice in that stage:

The culmination of the “Perfect Practice” is Divine Enlightenment—utter, permanent, and complete Identification with Avatar Adi Da’s “Bright” Divine State. This Realization, as Demonstrated through the Life of Avatar Adi Da, is not any form of withdrawal from conditions and relations. Rather, it is the most Sublime and Profound Demonstration of Love-Bliss.

Consciousness Itself
and Energy Itself
(or Light Itself)
Are Love–Bliss Itself.

Love–Bliss Itself Is Boundless—
not controlled at all,
not merely a "point".

The Inherent Radiance
of Being
Is Bliss,
Freedom,
Happiness,
Fullness,
Un–conditional Well–Being.

This Is
Inherently The Case—
not merely the case
sometimes,
somewhere else,
after death.

And then
There Is
Just That.
And That
Is That.

​In the traditions of ascent, Spiritual practice has often been likened to climbing a ladder—a progress from “lower” to “higher”. Some see this ladder primarily as a matter of going “higher” by becoming more and more “pure”. Others (especially in the tradition of Kundalini Yoga) see the body itself as “containing” the ladder. The fundamental energy of life is presumed to lie at the base of the spine, and the aspirant engages practices that are intended to “raise” that energy up through the spine, eventually reaching the crown of the head (and going even beyond the crown of the head). This is held to be the method of attaining Union with the Divine.

Adidam stands in contrast to all such approaches. The Way of Adidam does not require any effort either of “going up” or of “going within”. Indeed, in the Way of Adidam, all such efforts must be inspected, understood, and gone beyond. Whatever real impulse to Realize the Divine may be involved in such efforts, one of Avatar Adi Da’s core Revelations is that all such efforts are inevitably involved with ego—either the ego-search for the bliss of subtle experience (achieved by “going up”) or the ego-search for the bliss of no-experience (achieved by “going within”).

In the Way of Adidam, Spiritual Realization is a Gift freely Given by Avatar Adi Da Samraj. Avatar Adi Da’s Divine Spiritual Transmission Enters the conditional world from Above and Beyond, Infusing and Transforming all that appears. This is why Adidam is not a form of self-effort. There is no necessity to “climb the ladder” or “go inside” in order to “get to” the Divine. In fact, you cannot “get to” the Divine by any effort of your own. You can only receive the Divine—by responding to Avatar Adi Da’s Spiritual Attractiveness and relinquishing all forms of ego-effort and ego-activity.

The Realization of Avatar Adi Da’s Bright Divine Self-Condition transcends the entire course of human potential (or the first six stages of life). In the seventh stage of life, revealed by Avatar Adi Da, the impulse to Realize the Divine (as Light) by going “Up” and the impulse to Realize the Divine (as Consciousness) by going “Deep” are, by Avatar Adi Da’s Divine Grace, simultaneously fulfilled. In that fulfillment, Avatar Adi Da Samraj Himself is most perfectly Realized. He is Realized as the “Bright”, the Single Divine Unity of Consciousness and Energy—or Conscious Light Itself. This unique Realization, or Divine Enlightenment, wipes away every trace of dissociation from the body-mind and the world. There is no impulse to seek or to avoid any experience. Rather, everything that arises is Divinely Self-Recognized to be merely a modification of the Conscious Light of Reality Itself. This Realization is absolutely Unconditional. It does not depend on any form of effort by the individual. Rather, It is a Divine Gift, Given by Avatar Adi Da to the devotee who has utterly surrendered all egoity to Him. Only the Way of Adidam is the Divine Gift of directly and fully receiving the Blessing-Transmission of Real God, from His Divine Self-Domain Infinitely Above and Most Prior—even in the midst of the world.

The Unfolding Signs of Awakening in the Way of Adidam

As your practice of the Way of Adidam unfolds, you become fully responsible for receiving Adi Da's Spirit-Force in every moment, based on the capability of transcending the activity of self-contraction. It becomes obvious, in your living experience, that everything arising, including your own body-mind, is arising in a field of Spirit-Energy. As the process develops, your body-mind becomes more and more sublimed by Avatar Adi Da’s Spirit-Baptism, purified of any patterns that diminish that reception. You experience Avatar Adi Da’s Transmission of the “Bright” in a unique form, the “Samadhi of the Thumbs”, and through this process you are gracefully grown entirely beyond identification with the body-mind. This is a Gift of Spiritual Awakening as the Witness-Consciousness that stands prior to body, mind, and world, and even the act of attention itself. This Awakening to the Witness-Consciousness is followed by another Spiritual Initiation by Avatar Adi Da—into the “Perfect Practice”.