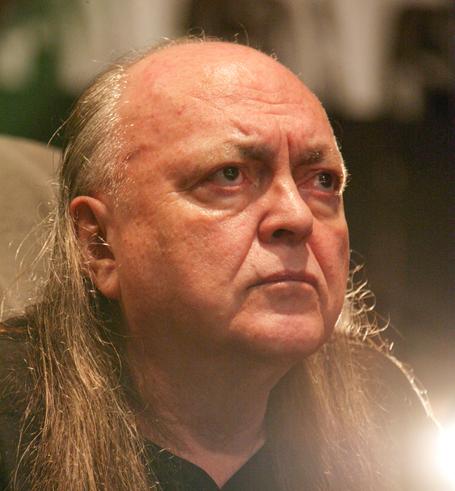 The miraculous reversal of

The Blessing-Regard of Avatar Adi Da Samraj brought me back from the edge of death.

On the weekend before my medical crisis, I began to experience the kind of pain I usually associate with a gallstone, which I’ve had in the past. Because I was coordinating a two-day retreat at the Mountain Of Attention Sanctuary, in northern California, I decided to “work through” the pain and go to bed on Monday, hoping to get well before the next weekend, when I had plans to go to Los Angeles.

By Tuesday, however, I was feeling much worse and had a fever. On Wednesday, my fever rose to 102°F and I began to be delirious.

Early Thursday morning, I got up to go to the bathroom, which is about five feet from my bed. But once there, I couldn’t stand up and fell backwards onto the floor. A devotee, who was meditating in the Communion Hall below, heard the crash, came up to see what was wrong, found me, and quickly called an ambulance. I was soon in the emergency room of the local hospital, drifting in and out of delirium, with no real sense of how serious my situation was.

JoAnne Sunshine, a friend and fellow devotee, came to the hospital that morning. She relates what happened.

JOANNE: There was a nurse in the room, and I could tell by his quiet intensity that he was very worried. He was extremely attentive, making sure that the IV drops were functioning properly, and he kept checking the monitors, looking for some kind of response to the treatments that Tom was being given to stabilize his condition. Then he tried to fill me in as tactfully as he could, without alarming Tom.

Tom’s situation was serious, perhaps even life-threatening. He had developed an infection that had spread throughout his bloodstream. He had been given six liters of IV fluid, which contained five different antibiotics, but the infection had developed to a point where his organs were beginning to shut down. His kidneys weren’t functioning and his blood pressure was dangerously low. They were afraid he would soon experience complete organ failure.

The attending doctor came in and began to ask Tom what kind of resuscitation techniques he would allow if his condition further deteriorated. Tom clearly and rationally explained that he would not want to be placed on life-support if there was no chance of recovery. I realized that this situation was much more serious than I had thought when I arrived, and that Avatar Adi Da needed to be notified immediately about Tom’s health crisis.

I called Connie, a devotee who is a medical professional, and informed her about Tom’s situation so that she could relay the information to Adi Da. Then I began doing the laying on of hands which (in Adidam) is a healing practice where Avatar Adi Da’s Blessing is invoked in the body of a devotee.

But Tom’s condition was not improving. And I got the distinct impression from the attending surgeon that he did not expect Tom to live. He had evaluated Tom for surgery—they suspected Tom had an infected gallbladder and wanted to remove it—but decided that Tom wasn’t strong enough to withstand an operation. They had tried a potent and somewhat dangerous drug to try to stimulate his blood pressure, but that hadn’t worked. The surgeon knew that every medical option had been tried—and Tom wasn’t responding. Tom, meanwhile, seemed blissfully unaware of the gravity of his situation.

At some point, I received a call from Connie stating that Avatar Adi Da had been told about Tom.

He Saved My Life

“Suddenly, with no effort on my part, I began to experience a current of joy that was somehow underneath and senior to everything else that I was aware of.”

Within minutes, Tom’s blood pressure began to steadily rise—I watched as the numbers on the monitors slowly started to climb for the first time since I had arrived three hours before—and his kidneys started to function.

Soon after this, five other devotees of Adi Da Samraj arrived. We all did the laying on of hands together, surrounding Tom with our devotion and love, invoking Avatar Adi Da’s Presence.

The doctors came in to provide to everyone an explanation of what was happening, and they were still communicating very somber expectations. The surgeon explained to us that he had done everything he could, and that we should go home and pray to "Almighty God" for Tom to live through the night. He said he really didn’t think Tom would.

Some of us stayed at the hospital and continued to do the Devotional Prayer of Changes. Devotees of Adi Da Samraj worldwide were also informed about Tom’s perilous condition and an all-night worldwide prayer vigil was begun. Tom made it through the night. By the morning, his vital signs were stable. Later, the surgeon said, “Indeed, this was a miracle from God. Tom is very fortunate.”

Tom has continued to improve and continues to grow in his relationship with Avatar Adi Da—however, with very little memory of these particular events!

I bow down at the Feet of the Ruchira Avatar, Adi Da Samraj, who continuously and miraculously Loves and serves all beings. May this story help inspire those who read it to turn to Him and receive His Blessings.

Tom tells the rest of the story:

TOM: Although I was oblivious to much of what was going on, one thing stands out: in my delirium, I was lost in “mind forms”—in completely random thoughts and images. Then, suddenly, with no effort on my part, I began to experience a current of joy that was somehow underneath and senior to everything else that I was aware of. It was clear to me, even in my delirium, that this was the Presence of Avatar Adi Da. I remember thinking that being overwhelmed by these mind forms must be what the death process is like—and I felt enormously grateful that there was this joyous, fundamental reality that allowed me to not be identified with my mind.

A week after I came home from the hospital, I received a package in the mail from Adi Da Samrajashram, where Avatar Adi Da was residing at that time. In it were dried flowers and two pictures of me, each of which were blurred with the water. A note from a fellow devotee informed me that Avatar Adi Da made the watermarks as He anointed my pictures with water during my crisis.

I praise my Heart-Master for His Blessing-Work with me and all beings. I know He saved my life.