I DISCOVERED AVATAR ADI DA around the time of my son’s birth, in 1996.

As I began reading Adi Da’s Teaching, I was struck by the incredible breadth and depth of His Wisdom, as well as the “bulletproof” coherence of His vast exposition on practical, philosophical, and Spiritual subjects.

Among His published writings are booklets on raising children in the Way of Adidam called Love, Wisdom, and Happiness in the First Three Stages of Life.* They contained many practical suggestions on how to raise mature and Spiritually sensitive children, without succumbing to the temptation of first-time parents to over-stimulate a child’s self-centered impulses.

Although I was not yet a devotee, I applied many of Adi Da’s recommendations in the raising of my son. On several occasions during his infancy, I felt the Presence of Avatar Adi Da’s all-pervading Blessing-Grace, and even noticed apparent responses in my son to Adi Da’s Spiritual Presence. As my son grew and began asking questions about “God” and “Life”, I introduced him more directly to Adi Da, all the while trying not to force my own impressions upon him, but leaving him to develop his own response.​

It soon became clear to me that, despite all the emotional turmoil of his parents’ divorce, and his conscious suppression of his feelings for Adi Da, my son had been having an intensive, if subliminal, devotional relationship with Adi Da for many years. And this subliminal life had been unearthed and brought to full conscious recollection in one morning, with the Blessing of Adi Da Samraj.

In retrospect, it is remarkable how unremarkable these recollections were for my son. From his point of view, he had always been in a relationship with Adi Da, and there was no shock in finally recalling and talking about it.

Since that morning, my son has felt the need to declare that he will still be a Buddhist “at Mommy’s house”. But his recollections of Avatar Adi Da persist, including how, during one surgery (probably when his heart had been stopped) Adi Da took him to view his own body from the outside. My son remarked how “strange” his own body appeared to him then, and I sensed from his reaction that this was yet another lesson from Avatar Adi Da: a demonstration of the falsity of identifying with the physical body.

I am joyfully heartbroken that, beneath the realm of psychological stress and suppression that afflicts many children of divorce, and even in the face of my son’s own conflicted feelings towards Him, Adi Da has continued to work lovingly and patiently with him, as with any other devotee.

In the summer of 2005, Avatar Adi Da traveled to California, where my son and I had a chance to see Him for the first time in many years. This summer had become an extraordinarily expansive and Grace-Full period, during which Avatar Adi Da granted His Darshan to all devotees, as well as many public guests.

One afternoon, I received a request that my son and I present a gift of a flower to Avatar Adi Da when He granted Darshan. There was no reason given for this request, but I assumed it was due to Avatar Adi Da’s Help during my son’s medical ordeals.

As we awaited His arrival, I began to recall how frightening and painful the surgeries had been two years before—memories which I realized I had “put behind me”—and I became tearful from the feeling of deep gratitude for Avatar Adi Da’s Blessing-Regard at that time.

After Avatar Adi Da had taken His seat, my son and I were brought before Him to offer our flowers. Adi Da Regarded me briefly, and then for a long while, Regarded my son with incredible sweetness and love. There was a rising feeling of love throughout the gathering of people. I began to weep and then my son broke down as well.

Avatar Adi Da gestured for my son to approach, and then embraced Him with the greatest gentleness and affection. My son wept and thanked Him. Adi Da stroked his hair, kissed him, held his face, and put His hand over his heart.​ 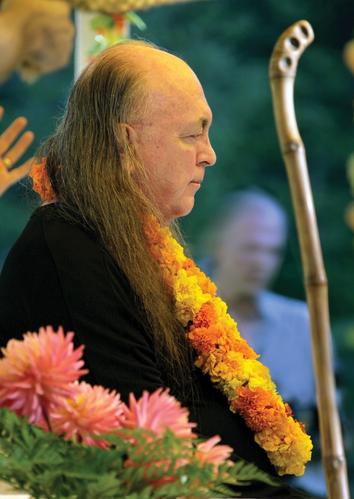 birth, that is their Destiny, and that is the Power that moves their entire future if they will associate with It rightly.

[The Scale of the Very Small]

You must give children the cause and freedom to be ecstatic. Children must understand what ecstasy is, what Happiness is. Parents and teachers should discover the functional dimension to which children are sensitive at every stage of adaptation, and then teach them in those functional terms.

[The Practice of Ecstasy with Children]​ 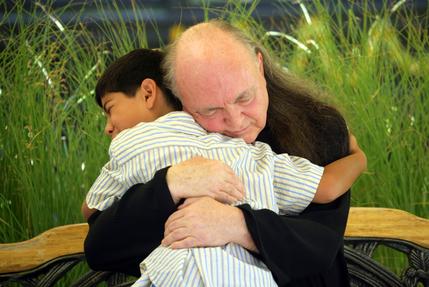 ​With every Gesture of Adi Da, waves of love swept through the gathering. Loving gestures towards one child seemed to be directly and intimately experienced by every person present, until many among those gathered were weeping. The tangible love felt by all was unmistakably recognizable as "Love"—and yet it felt infinitely more profound and pervasive than the "love" we normally feel.

Eventually, my son sat back down beside me, and we both continued to behold Adi Da. As He continued to Regard my son, I noticed tears on Adi Da’s face.

Finally, after a few minutes of this intense tenderness, Avatar Adi Da stood up before all present and became utterly calmed and motionless. It seemed to me that He was Communicating, by way of direct demonstration, His Compassionate Blessing in the face of our loving and fear of mortality and loss, and His Offering to behold and commune with Him, as He Is, in the free and blissful space beyond fear, mortality, and loss.

​​​Unfortunately, my son’s mother and I separated when he was just three. My former wife didn’t like the idea of a Guru, and, on a few occasions when my son seemed to make advances in his own sensitivity to Adi Da, she responded to his enthusiasm with displeasure.

As the years went by, my son adapted by tactfully removing photographs and other signs of his feelings for Adi Da from his home with his mother. This situation, along with the growing willfulness typical of older children, made it increasingly difficult for me to encourage my son to remain open to Adi Da. I especially did not want to impose the issue of his parents’ divergent religious perspectives and practices, and thus entwine my son’s Spiritual life with the conflicts of his parents.

I became a devotee of Avatar Adi Da in 1999. In 2002, it was decided that my son, then three years old, would have to undergo several intensive medical procedures, including open-heart surgery, to correct an unusual and complicated congenital heart-lung condition. At this time, I brought my son’s medical case directly to Avatar Adi Da. He Graced my son and myself with His Blessing-Regard over this difficult year, sending us His Love and Blessings, and even keeping up with the surgeries hour-by-hour.

“My mind was completely blown when (my son)

Educate everyone—from conception on—to live in freedom, to live in Truth, to Commune with Me and to adapt rightly, stage by stage, to every function of their conditional existence and to the Ultimate, or Non-conditional, Condition That I Am and That I Reveal.

[Love, Wisdom, and Happiness in the First Three Stages of Life]

Each child must be free and ecstatic at the simple native level of his or her own existence. Children must be ​​awakened to feel that they are associated with an Infinite Power, or Mystery, that sustains them, that gave them

​​These five- and six-hour broadcasts occurred in the evening in Fiji, but overnight in the eastern United States. So it was that, very early one Sunday morning, while my son slept in the next room, I asked a question directly of Avatar Adi Da by phone.

As soon as I was informed I would be the next person to ask a question, I began to feel Avatar Adi Da’s Spiritual Presence in my heart and my home. By the time I began to speak to my Beloved Guru directly, I felt His Spiritual Radiance flowing down like hot honey through the top of my head.

In response to my question about His process of Divine Re-Awakening, Adi Da recounted several incidents in His childhood. As He lovingly described these events, I was drawn to remember events in my own childhood, but this time with a radiant, “love-full” intensity, as if somehow Avatar Adi Da’s childhood were the Joy inherent in every childhood itself!

However, what happened later that morning was most astounding of all. After my son awoke, I told him over breakfast about my “phone call” with Avatar Adi Da and His talk about His childhood.

At this, my son immediately launched into countless stories of his own psychic and Spiritual contact with Adi Da, seemingly going back for many years! He recalled with great clarity and enthusiasm detailed encounters with Avatar Adi Da in dreams, while playing with friends, and, especially, during his hospital stay.

While my son enjoys creative story-telling on occasion, the sheer volume, pace, and clarity of these stories far outstripped any typical story-telling session. But my mind was completely blown when he suddenly interrupted these recollections to explain to me very directly that . . .

Later, I realized that this statement is quite similar to the text of the Narayana Sooktam, an Upanishad from the Vedic tradition of India, adapted by Avatar Adi Da for use by His devotees in their worship of Him:

My son’s operations, while lengthy and even more technically difficult than first expected, went very smoothly. During this time, I felt Adi Da’s Blessing-Regard descending over the entire hospital campus, and, on one very traumatic occasion, felt the “familiar” feeling of Adi Da’s Spiritual Presence directly in my son’s heart-region.

After the first operation, my son expressed an intense desire to go to Fiji to see Adi Da, and asked me daily whether I had gotten “permission” for him to go!

Within a few months of the last operation, he was given a clean bill of health by the doctors, who said they were very happy with his progress. None of the many potential complications from his new circulatory system had arisen. And, within six months, my son underwent a growth spurt that moved him from the twenty-fifth to the fiftieth percentile of weight for his age. Moreover, he recovered well from the emotional and visceral fear associated with these many traumatic and invasive physical events.

Before long, my son had moved into his middle childhood, with the surgeries seemingly long-passed.

At this time, on the few occasions we discussed Adi Da, my son seemed rather disinterested. Although he had practiced meditation in the past—“feeling the Mystery”, and “breathing out the bad stuff and breathing in the good stuff”, as Adi Da recommends to children—he resisted it. I began to lament that he might soon request to terminate any association with Adidam, and so I all but ceased to talk to Him about Beloved Adi Da.

In August 2004, Avatar Adi Da began a period of internet broadcasts from Fiji to devotees all over the world, in which He addressed their questions. This was the first time I had ever seen my Beloved Guru speaking, and the living manifestation of His Humor, Intelligence, Love, and Compassionate Address to devotees drew me to Him even more deeply.​

My Self Is in My Heart 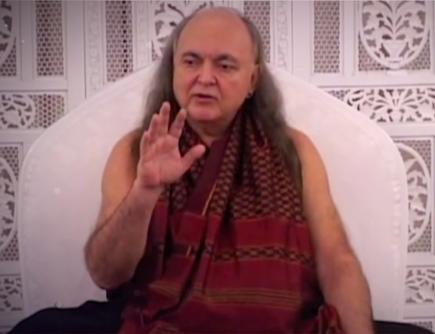 “In 2002, it was decided that my son, then three years old, would have to undergo several intensive medical procedures, including open-heart surgery, to correct an unusual and complicated congenital heart-lung condition.”