I was puzzled, and decided to conduct a little experiment.

I put the book back on the shelf in a section of the bookstore that held hundreds of other books on yoga and Hinduism. I closed my eyes and ran the tip of my right index finger across the spines of the books in that section. With my eyes closed, I could definitely feel the energy in some, but not all, the books. Most of the books were, in fact, "dead". Three books clustered together had a strong but mellow vibration, and scattered throughout the shelves were several books with a very powerful, almost electrical energy that I could feel zapping into my finger and up into my head, as if I had stuck my finger into a light socket.

As I found these books, I kept my eyes closed and kept scanning. I did not want to confound my "experiment".

I then opened my eyes. The three "mellow" books were small paperbacks from the Ashram of Ramana Maharshi. Not too surprising—I knew of Ramana Maharshi as a great, if enigmatic, spiritual figure. The real surprise was the identity of the "light socket" books. They were all publications by a teacher I didn't know, an American named "Bubba Free John", who is now known as Adi Da Samraj. As I

As if I had stuck my finger

into a light socket 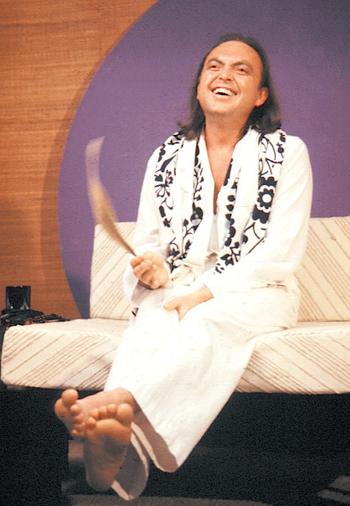 Jonathan Lynch is a biologist, and a professor of plant nutrition at Pennsylvania State University. He discovered Avatar Adi Da as a result of a more or less scientific—and humorous—experiment he performed many years ago when he was an undergraduate student at the University of California at Berkeley.

In the winter of 1978, I received an initiation from a saintly Indian yogi in the Kundalini tradition. The initiation was a rocket launch into a wonderland of subtle energies, visions, and sounds. After a few days, I became accustomed to directly sensing the life-energy as delicate colors around people's heads, as a tingling in the gums when eating raw food, as a vibrancy in inhaled air, and in the thrumming energy centers of my own body.

A few days later I found myself in Shambala Booksellers on Telegraph Avenue in Berkeley, browsing a book about yoga. To my surprise, I sensed the vibratory life-energy in the book. This struck me as odd. As a budding young biologist,

I believed that living things manifest energy on many levels, some of which might only be detected by a yogically attuned nervous system, but that books were just dead matter. Yet in this book, I felt the unmistakable buzz of life-energy.

perused these books, my mystification grew. I had always assumed that Spiritual Wisdom was the province of the mystical traditions of the Orient, but this teacher appeared to be a brash young American not following any obvious tradition. Worse, the books were rather pricey for a struggling college student, I thought, and walked out of the store, laughing at what seemed to be a cosmic joke, the universe playing tricks on me by hiding its living energy in an unconventional disguise. I would have to consider this! There might be a lesson here.

I walked several blocks up Telegraph Avenue back toward the University campus, where I saw that the University Bookstore was having a sale. OId textbooks were strewn over several card tables set up on the sidewalk—twenty-five cents a book. There, in the center of one of the card tables, the only two books standing upright, were two books by Adi Da Samraj, completely affordable at twenty-five cents each! This time I got the message, and bought the books.

“I had always assumed that Spiritual Wisdom was the province of the mystical traditions of the Orient, but this teacher appeared to be a brash young American not following any obvious tradition.”