The Hole in the Universe

1979 was the year we began sacramental worship of Avatar Adi Da. The fire that night at Red Sitting Man was our first sacred fire. It was most memorable, however, because Beloved Adi Da attended the occasion. In the evening, a small group of devotees accompanied Adi Da up the narrow, steep path that leads to the fire site. I walked behind Him to escort and serve Him during the ceremony. We rounded a bend in the path, and, beyond a large lone pine tree, I saw Red Sitting Man. The site was awesome in the twilight, a wide trough etched by Nature out of the stark white stone of the hillside. The fire pit lay at the foot of the trough. Above, the stone rose to a slightly flattened mound—Avatar Adi Da's seat.​ 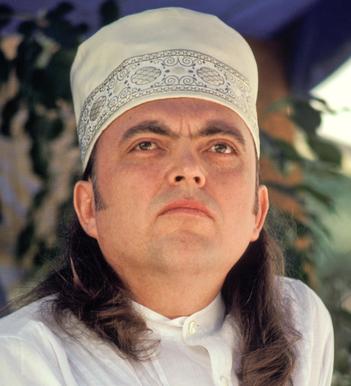 Adi Da Walked to His seat above the fire and sat down. Those in attendance sat on either side of Him in a "U" around the fire pit.

From the moment the fire was lighted, Beloved Adi Da did not move for perhaps an hour and a half. He sat upright in a perfect lotus posture. He wore a red cap, a yellow shawl, and blue cotton pants. As it grew darker, the colors of His clothing faded, and He became only a silhouette against the moonlit sky, but His Face reflected the glow from the fire. His Open Eyes reflected the flames. I gazed at Him almost constantly throughout the entire occasion and I never saw Him blink. He simply sat and stared into the fire with complete stillness and intensity.

For a while I sat looking from Adi Da's glowing Face to the fire beneath us. As I sat there in His Company, I became aware of the world in a totally new way, a way I had never noticed before. It was as though there was a "hole in the universe," as Adi Da describes it, through the world itself, and on the other side was the Great Being, the Great One.

This One was Revealed to me that evening as a Person, a Great Personality, something that tangible, that present, that conscious. It is Consciousness Itself. Suddenly I knew and understood so many things Adi Da had Spoken about. This was the Prior Condition. It was the Radiant Divine Being. I knew It as the Divine Person. Throughout His Teaching Word Adi Da refers to this One as the Divine Person, as a Personality. In an Essay from The Enlightenment of the Whole Body, Adi Da Says:

I looked off into the distance at the mountains across the valley and I saw them in a new way. I knew that they were not "real" in the sense I had always thought them to be. I knew that somehow they were a part of this Divine Person. And I looked at Adi Da, so beautiful in the moonlight, the flesh in His Face reddened by the glow of the fire, and I knew that like the mountains He was not "real" in the way I had thought Him to be.

In The Hymn Of The True Heart-Master, Adi Da has Written:

Experiences, visions, sounds, lights, conditional energies, fascinating things, and all conditional knowing, within and without, are not Ultimate "Knowledge" (or Free Realization) at all. Therefore, I bow down to the One Who is always already Established in the Mindless Mood of the Self-Existing and Self-Radiant Transcendental Divine Being.[verse 63]

I will never forget that night. I knew that I had experienced Adi Da's Blessing Transmission.

​​About a year later another experience with Bhagavan deepened my understanding of this Divine One. One afternoon Adi Da was lying on a couch in His quarters at Tumomama Sanctuary in Hawaii. I sat on the couch with another devotee and massaged His calves and knees, putting all my energy into the task. I began to feel the familiar sense of the Divine Person and simultaneously the sense of attention in the right side of the heart that always accompanies that intuition in me. 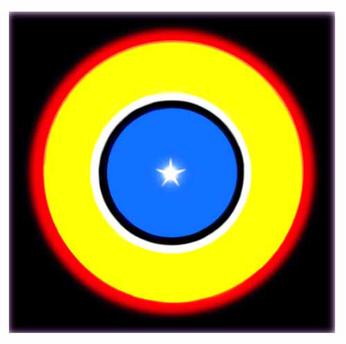 On another occasion at the Mountain Of Attention, on a summer evening in 1982, a group of devotees were gathered in Beloved Adi Da's quarters at His residence. As we sat around Him, we formed a mandala [a circle] with Adi Da at the center.

Adi Da described the Cosmic Mandala that night for the first time. He described the White Star in the center of the Mandala, which is the reflection of the Divine Domain.

As He Talked, I began to see White Light emanating from Him, and very soon the room was filled with White Light. He became a White Being. I saw this dramatic change not in any ordinary visual sense, for I could still see His bodily Form, but with some subtler vision. And again I felt Him profoundly to be the hole in the universe.

Adi Da ended His Talk and sat with us in meditation. Not only could I see Him again in His Divine Form as the world seemed to dissolve around me and everyone in the room was flooded ​​with this White Light, but I saw also that Adi Da Transmits this White Light, that it is something He does. On this occasion of meditation, as He allowed us to witness Him becoming active in this way, He became a very forceful, powerful, and undeniable Transmitter of His Own Divine Condition.

I could "see" the Light emanating from Him to the entire room. The Light did not come from His flesh Form. It came through the hole in the universe that He Is. It came from the Divine Domain. I recognized that this was His unique Transmission.

Since that time, Beloved Adi Da has Revealed Himself to me in deeper ways as the Divine Person. But it is still the same fundamental intuition I knew in 1979 at Red Sitting Man. And I know it is only Adi Da, the Divine Person, that we will come to Realize.

“It was as though there was a ‘hole in the universe’, as Adi Da describes it, through the world itself, and on the other side was the Great Being, the Great One.”

The cosmic mandala as described by Avatar Adi Da