​In the kitchen of His house, I talked to Jacqueline, the devotee who was attending to Avatar Adi Da that night, telling her about the need to ask for His Blessing for Kimberly. Looking over the tray to make sure that everything was in order, she entered Avatar Adi Da’s private quarters.

​​I waited in the kitchen for about ten minutes until Jacqueline came out. She looked overcome with astonishment at what had occurred. She told me that Avatar Adi Da had instantly stopped what He was doing and received the request. He rearranged the photographs on the tray, putting Kimberly in the center, and the photographs of her father, her Aunt Margaret, and her cousin Jonah around her. (Margaret had not

been able to find a photo of Kimberly’s mother on such short notice.)  He then placed His hand an inch or two above Kimberly’s picture for a moment, and started moving His hand in a slow, clockwise motion, as if to move the loving energy of Kimberly’s family in towards her.

Avatar Adi Da did this for some moments, then started the process all over again, holding His Blessing hand over Kimberly, and then waving His hands in the same clockwise motion. Then He sent the tray into His Sukra Kendra,

the Holy Temple reserved for His use, where He goes every day to do His mysterious Work of world-Blessing.

MARGARET: When Indigo called me and told me of Avatar Adi Da receiving the tray of photographs and prayers for Blessing, the light in the room where I was became “Bright” with His Presence. She said the tray went into His room one minute after midnight, Fiji time. This struck my heart so profoundly—that His very first action of the New Year was to Bless a little eleven-year-old girl who was in a perilous position. Words cannot express the gratitude that I felt—and also the certainty that Kimberly would be fine.

I spoke to my brother several times the next morning. He said that Kimberly had briefly opened her eyes, which everyone felt to be a good sign. And he also said that—“miraculously”—the huge swelling of her brain that the doctors had been monitoring, and that they were very worried about, had not only stopped but was reversing itself. The doctors said that in brain injuries like Kimberly’s it usually takes days, if not weeks, for this to occur. The reversal astounded everyone who was treating her.

I told my brother of Avatar Adi Da’s Blessing, and he was so truly thankful.

The doctors had thought that Kimberly might have to be in the hospital for a long time, perhaps months. But she was released from the hospital in a little over a week. This is a hospital where they treat the worst ski injuries from Vermont and New Hampshire, so they see a lot of traumatic head injuries. My brother told me that the staff was amazed that the long-term swelling and all the other effects of this type of injury had not even happened. The staff at the hospital said more than once that her speedy recovery was "a miracle".

Within a few weeks, she was back at school. Brain scans showed no permanent damage.

I spoke to my brother Peter today—May 19, 2005—to wish him happy birthday. Kimberly is completely well, with no signs of trauma. Once again, he expressed his gratitude and thanks to Avatar Adi Da. And my heart breaks when I remember this utterly Compassionate Blessing from my Beloved Guru, who so directly touched and healed this little girl.

*Avatar Adi Da’s devotees sometimes refer to Him as “Beloved”, acknowledging the love and heart-intimacy of the Guru-devotee relationship.

**The flowers that accompany a request for Blessing are a devotional offering to Avatar Adi Da. He frequently uses these flowers in His Work of Blessing, sometimes placing a flower on the part of an individual’s body (in the photograph) that most requires healing, sometimes even covering the entire photograph with flowers.​

“The ‘best case’ scenario, they told him, was that she would survive but be completely paralyzed or have severe brain damage.”

I got off the phone and I immediately started to remember and invoke Avatar Adi Da and request His Blessings in a feeling-prayer—that this sweet eleven-year-old girl be allowed to live, and not find herself a paraplegic or worse for the rest of her life.

I called Adi Da Samrajashram—where my Divine Guru was residing at the time—and relayed the message of my niece’s condition to Indigo (the devotee responsible for submitting requests for Beloved* Adi Da’s Blessing) and to my son, Jonah, who was there on retreat.

Indigo called me back and asked me to email photos of Kimberly and her family, and to immediately write a letter to Avatar Adi Da about Kimberly’s situation. I felt that I had not a minute to waste. But I also felt very strongly that my Beloved Guru already knew of this situation and was Present there, with Kimberly and her family. This was so clear. It was also clear to me that surrendering the situation into His hands was my only possible gesture and responsibility.

After I sent the photos (which took several hours to locate since they had to be digital, and this was New Year’s Eve, and my family was in the midst of a crisis), I stayed up to watch a video of a recent devotional sighting, or Darshan, of Avatar Adi Da.  And I continued to stay up, all night long, as awake as I have ever been, with all my attention on this link between Avatar Adi Da and my niece, unconscious in a hospital room in New Hampshire. It seemed that there was no time or space separating any of us.

“He then placed His hand an inch or     two above Kimberly’s picture for a       moment, and started moving His hand   in a slow, clockwise motion, as if to       move the loving energy of Kimberly’s   family in towards her.”

INDIGO: It was late at night and I was hesitant to disturb Avatar Adi Da. I tried to convince myself that Kimberly would live through the night and that I could send the request for Blessing in the morning, when Avatar Adi Da usually received them, and all would be well. But I was also seized by the strong intuition that Kimberly would not live—that this girl needed the greatest Help possible, and she needed it now. In my deepest heart, I was certain that Avatar Adi Da was the One Who could help her most, whether she lived or died, that medical science could only deal with the physical body, while Avatar Adi Da could Influence the body, the psyche, the entire “package” that was Kimberly. He alone would know—and Do—what she needed in that moment, what would be most beneficial and auspicious.

It was 11:00 PM. I took a deep breath and printed the photographs that Margaret had sent of Kimberly, Peter, Jonah, and herself. I placed them on a tray, along with the letters from Margaret and Jonah prayerfully requesting Avatar Adi Da’s Blessing for Kimberly. I also gathered flowers—as many as I could find with my flashlight at that hour of night.**

Then I called Ruchiradama Quandra Sukhapur (a member of the renunciate order of devotees in the Way of Adidam) to tell her about the situation. She asked me a few questions, and then agreed that the request for Blessing should be taken immediately to Avatar Adi Da’s house.
​

recovery from a skiing accident

A Gift of Life 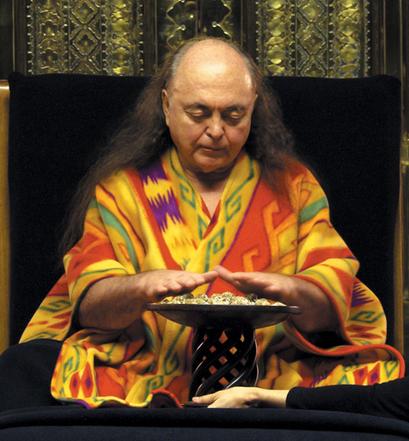 It was early in the day on New Year’s Eve—December 31, 2003—when my brother Charles called me. He said that my brother Peter had just called him from the emergency room at a hospital near Lebanon, New Hampshire, where Peter and his family had been on a skiing trip. My niece, Kimberly, had been in a serious accident.

On Kimberly's first run down the mountain, she apparently lost control and headed into a grove of trees next to the slope. Her father saw her go whizzing by at breakneck speed and skied down after her. When he got to the bottom of the run, he saw a group of people gathered around someone lying next to a tree. It was Kimberly—with her head split open, bleeding profusely. She was airlifted to a nearby hospital and rushed into the trauma room. The doctors were unable to give my brother any hope that she would live through the night. The “best case” scenario, they told him, was that she would survive but be completely paralyzed or have severe brain damage.