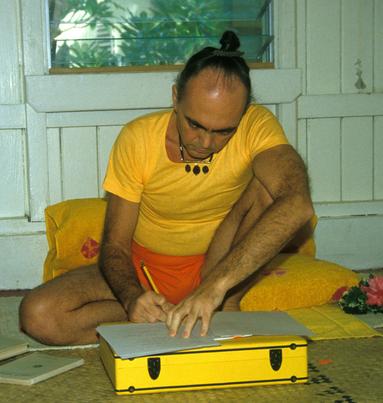 Why Does Adi Da Write in Capital Letters?

Avatar Adi Da has transformed the English language into a vehicle to serve His Communication of the Sacred, God-Realizing Process in His Company. In doing so, He has Revealed the logic underlying the common conventions of written English.

Ordinary speech and written language are centered on the ego-“I”, as a tent is raised on a centerpole. Therefore, in ordinary speech and written language, the ego-word “I” is commonly capitalized and everything less than the ego-“I” is shown in lowercase. In contrast, the “centerpole” of Avatar Adi Da’s Speech and Writing is the Heart, the Divine, Consciousness, Truth, Realty, and Happiness. Therefore, He capitalizes those words that express the Ecstatic Feeling of the Awakened Heart, and, in many instances, lowercases those words expressive of the ego or conditional limits in general.

In addition, Avatar Adi Da has developed the conventions of punctuation (commas, dashes, quotation marks, underlining, and parentheses). This allows Him to clearly articulate complex sentences in such a way that His intended mean can be expressed with utmost precision.

This capitalization convention, which Avatar Adi Da has worked out to an extraordinarily subtle degree—in ways that are often startling— is in itself a Teaching device, intended to communicate His fundamental Revelation that “There is Only Real God”, and that only the ego (or the dualistic or separative point of view) prevents us from living and Realizing that Truth.