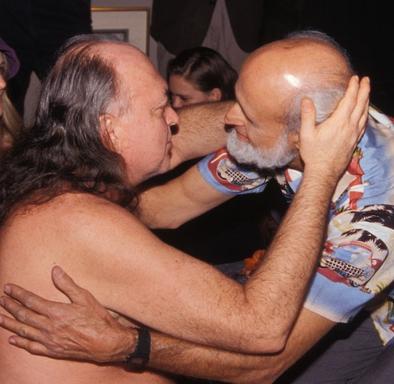 Several years, inheritances, mansion parties, trips to Europe, and a Jaguar later, my indulgence of the good and affluent life met its Waterloo in the form of a “talk” by Swami Prabhavananda in the Santa Barbara temple of the Vedanta Society. Even though I was uncomfortable with the accent of Bengal, the heavy incense, saris, and orange robes, and even annoyed, initially, by the palpable atmosphere of Peace, the message and the ancient Vedic formula got to me once again. "Tat tvam asi, thou art That." the Swami intoned.

He retold Ramakrishna's story of the Guru who held a disciple's head under Ganges water for some minutes. After he was allowed to emerge, the disciple was asked what he had been thinking of. His next breath, of course. And the Guru told him that when his desire to know God was so strong that it remained even under the threat of death, then only would he be worthy of Realization. Although the word "kundalini" was not yet part of my vocabulary, I watched waves of energy discharge themselves from the lower part of the spine and undulate in delicious electric rhythm toward the chest, where they disappeared, leaving me in a state of mild catatonic enjoyment and total ineptitude for the after-church handshake-conversation at the door.

The idea of intense devotion to God was still a source of peculiar embarrassment to me. I knew I was not ready to embrace the uncertainty of renunciation or celibacy, referred to even in the literature of India as "the dreaded vow." I certainly dreaded it. My fascination for the archetypal holy man brought me back to the Swami off and on for two years, but he would not compromise renunciation and celibacy in my case...

I suffered through two years of army service, consoling myself by studying opera, reading Shankara, the Bhagavad Gita, and the Upanishads. I fell in love with Shankara's conceptualization of Maya as the illusory world-movie being played on the screen of the Real. I then became obsessed with "the Self" of the Upanishads. For days at a time I pondered the symbols: butter in cream, the thread of a necklace, the bubble becoming the ocean. The year was 1955. Not a single person I knew was remotely interested in mysticism or India, and I became quite introverted in the face of a growing reputation as a peculiar nut.

After three years of reading and experimentation with second hand spiritual knowledge, I was led, in San Francisco, to the one I thought was to be my guru. In the years following that meeting, I lived as a relatively passive and obedient disciple, working with the traditional forms of yoga in a westernized context, entranced by the charisma of my guru.

During this time I was given a series of yogic techniques and practices, each of which served as a fascination as well as a motivator to renewed effort. The goal of this practice was to have them merge in the clear white light. Self-realization was coincident with the rising of the kundalini force to the sahasrar, the terminal point and Absolute Source above.

But always the success of the sadhana depended on a total and unquestioning responsiveness to the guru. And the eventual goal, constantly to be held in view, was the realization of the Self that was beyond the mind, that in fact had nothing to do with the mind, but that guaranteed release from karma and reincarnation.

Through the grace of the guru who pushed from the outside and pulled from the inside, one was supposed to develop the capacity to dive progressively ever deeper within or to ascend ever higher on the spinal ladder, until finally the Self was perfectly realized above.

After sixteen years of struggling to dump a recalcitrant ego, it had become obvious that the long-sought transformation and transcendence were apparently no nearer than at the beginning of the effort.

In this state of mind I stumbled across the Teaching of Avatar Adi Da in late October of 1974. I eagerly read his books and the issues of The Dawn Horse magazine, speaking to no one of my discovery. My perspective on every aspect of traditional spirituality and sadhana was intractably making a 180-degree turn. Most disturbingly hopeful was the discovery that my conception of the nature, function, and identity of the guru was being shattered and simultaneously replaced by an increasingly penetrating intuition of Adi Da Samraj as true Guru. My thoughts were turned to him constantly — when on the bus, walking, and eating. I read the Teaching while others slept and at every other available private moment. And I would fall asleep exulting in the perfection, clarity, relevance and availability of the Teaching.

After sixteen years of yoga, traditional meditation, and monastic life, I was now a candidate for the pre-student sadhana of Adidam.

My first days in the community allowed, for the first time in years, a genuine relaxation of previously manufactured self-concern. I discovered persons again in relationship without preconditioned boundaries. The Oneness previously sought was found genuinely to pre-exist in common touch. I dared to know again what I had suspected all along, that the

“I eagerly read his books and the issues of The Dawn Horse magazine, speaking to no one of my discovery. My perspective on every aspect of traditional spirituality and sadhana was intractably making a 180-degree turn.” 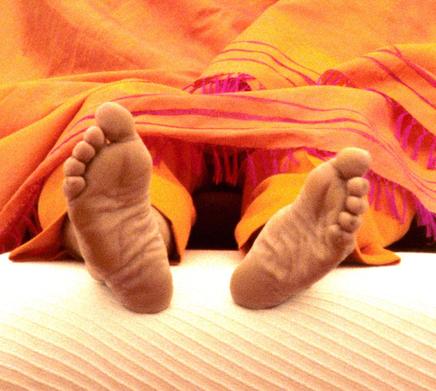 Divine was not removed from the World, nor was it some special attainment that superseded a happy and commonly shared humanity. The ancient search for the exclusive revelation had collapsed, and I began to feel the real possibility of being nothing in God.

And so it was that the total collapse of all the formulas of the yogic search coincided with the discovery of the Teaching of radical understanding. One day I was still numbly attempting the practice of seeing oneself everywhere and in all persons. The next I was simply observing the motivated, contracted activity of my continuous seeking. I began to understand the dilemma of the seeker who would resort to such a formula in order to prevent the very awakening in consciousness, in relationship, that would make this practice a real event.

As I look back now on my sixteen years of monastic life and yogic seeking, I see that one characteristic mood seemed to pervade my life during that time. I was in despair of Happiness. Although I always searched for Happiness as an alternative state, even in false meditation, or absorption in non-being, I neither attained Happiness nor felt it to be truly realizable. I even erroneously assumed over time that un-Happiness was something of a sober prerequisite for real spirituality!

As a result, I never understood or confronted the fact that I was always “avoiding relationship”, that I was creating my un-Happy state in each moment by seeking for immunity from the intrusions of life. The "spiritual" search was deviously selfish, and only reinforced my sense of self in complacent and artificial forms.

In the years since I left the monastery to offer myself in relationship and service to Avatar Adi Da Samraj, I have understood, through his Graceful Presence and the Teaching, how "I" contract in the field of consciousness in every moment. I have "heard" the Teaching that there is no separate one who needs to be returned to a separate Divinity. I have understood that this kaleidoscope of appearances is a play of the Divine, and that Happiness is the Condition in which this body-mind always rests and adapts to the Living Spirit Presence, Who paradoxically accomplishes everything while "doing" nothing.

Finally, it has become obvious that my years of seeking for the inner self were only an extension of my childish need to be consoled by and absorbed in the great illusory parent deity and my adolescent reactions to the threat or imposition of the world on my autonomous self, which I wished to preserve through detachment and controlled isolation.

Clearly, no such method or program achieved Happiness. The current or condition of unqualified Happiness that has been transmitted to me and my friends in the Company of Adi Da Samraj is Truth. All understanding arises in it. It is not dependent on, nor is it qualified by, any state or condition. The fundamental and necessary truths he has gracefully shown to me are:

We must understand the action of self-reference or un-Happiness.
We must transcend the illusion of a separate self.
We must Realize the Reality and Power and Presence of God, or perfect Happiness.

I am eternally grateful to the Radiant Master Adi Da Samraj.