AVATAR ADI DA SAMRAJ: We live like knowers, striving toward absolute information, but death is a perfect insult that frustrates all knowing. The death of an other convicts us of our own death, and makes us ponder. But no ultimate knowledge comes from this pondering. Death is the frustration of knowledge. The knowledge that an other has died is itself the frustration of all knowledge. We are not knowing in our pondering over death. We are contemplating Mystery, the answerless Paradox of our living existence. The death of an other and the death of "I" confound the whole spectacle and consolation of knowledge. Death is not the attainment of any state we can know. Death is sacrifice. The only way to come to terms with death is to come into a harmony with its Process, its Way. And death is sacrifice, not knowledge or a Way of ultimate knowledge. Death is the sacrifice of knowledge, of independence, of experience, and of self.​

​The observation of the death of an other and the conviction of one's own necessary death are not a means to knowledge but a means to sacrifice. Sacrifice is the Law. Knowledge or secure independence is that which is sacrificed. If we truly observe and feel the death of an other, we are moved to live by Wisdom rather than knowledge. Wisdom is the presumption of alignment with the Way or Process of existence, which is Sacrifice. But knowledge is only a reflection of or about the way things work. The knower is independent, not a participant in the process that is observed. But Wisdom is always already confounded, relieved of independence, so that there is no option but to submit to the Process of existence itself.

At the level of the experiential body-mind, "I" can know about things arising. The manifest body-mind or "me" appears and functions relative to all other arising conditions. Therefore, manifest or born existence is the play of knowing about, but it simultaneously exists as the consciousness than which there is no other, for "I" do not know what a single thing is, and, therefore, "I" is every thing. "I" includes the existence of all that arises. The Condition of "I" is that of which all arising is only a modification or variation—but which is not itself ever in any sense changed.

Such is the Paradox that is "I" in the case of every one. All arising, all beings are described by this Paradox. And the ultimate destiny of "I" is likewise necessarily contained in this same Paradox. It is Mystery. "I" is eternal Sacrifice, without ultimate knowledge. Realization of the Paradox of our existence is not knowledge (a position independent of the Paradox) but it is Wisdom, or the tacit presumption of the Way of the Paradox itself. If "I" presume the Way of Ignorance, the Law is fulfilled, and "I" am free to live and exist prior to fear, even though "I" constantly move in Mystery and am given no ultimate knowledge. If "I" do not presume the Way of Ignorance, the Way of the Process of existence, but seek knowledge instead, then fear is the motive of my life, and existence itself always appears to be at stake.

The recent death of an other and the death of "I," which is yet to come, are a perfect insult to all knowledge. If we rest in this insult, then we are moved to the life of Wisdom, wherein no answer and no experience can ever possess or define us. Wisdom presumes the Paradox and the Mystery of existence. Wisdom is moved to the Way of sacrifice, to love, to present happiness, and not to the Way of ultimate knowledge.

To confront death in Truth we must be humbled and confounded. The death of an other reminds us that in every moment we are principally confronted not by defined objects that are independent of us but by an indefinable Process that includes us. The death of an other reminds us that sacrifice is the Way of Life. When we confront the death of an other we are confronted by Mystery or Paradox, and we are confronted by the demand for participation or sacrifice founded in the acceptance of the necessary Paradox or Mystery of existence. Wisdom is such acceptance, and the participatory sacrifice is love or present happiness. It is unobstructed feeling-attention in all relations. It is to dwell in the profundity that confounds all knowing. It is to resort to the presumption of absolute Ignorance as the Truth of our unknowable existence.
Hold on to no thing and no one, not even your self. Be certain of no knowledge. Be the sacrifice of all conditions in every moment, and thus abide in Communion with the eternal Truth, wherein the root of our independence is eternally hidden and our common Identity is always already Revealed.

In this Way we will affirm and participate in the necessarily eternal Existence in which we all appear: Let us surrender into Infinity with all our friends and hold on to no thing or condition that ever appears. Let us forget all things in present Happiness, and so forgive the universe for all its playful changes. Let us always love one another, and so forgive one another for appearing, for changing, and for passing out of present sight. So be it.

[Excerpt from The Enlightenment of the Whole Body]

Hold on to no thing and no one, not even your self.

Be certain of no knowledge. Be the sacrifice of all conditions in every moment, and thus abide in Communion with the eternal Truth. . . . 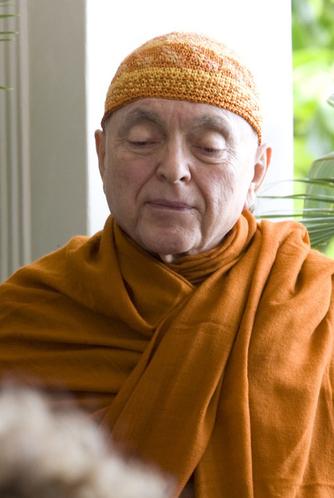 Death is a Perfect Insult