wove a beautiful tapestry of themes related to the  Spiritually Awakened process in the Way of Adidam. Central to the "consideration" of this period was Avatar Adi Da's Communication of the Indivisibility of Consciousness (or Being) and Light (or Energy). This was a reference to the Divine Enlightenment He was Transmitting—the potentially sudden, or “overnight”, Realization that Reality is Consciousness-and-Energy as One, not as “two”. Everything arising is a mere modification of the Unbroken Love-Bliss-Light of Real God. One of the devotees present during the "Overnight Revelation", Ruchiradama Nadikanta (a senior devotee of Avatar Adi Da and a member of the Ruchira Sannyasin Order), describes what it was like to be present as Avatar Adi Da gave His Divine Yogic Instruction:

RUCHIRADAMA NADIKANTA:
Again and again, as He spoke or sat silently, His own Spiritual Person Flooded into our body-minds and Drew us into this Sea of Divine Light. He was Penetrating the body-mind through to the toes, permeating every cell with His Love-Blissful Radiance. He opened the nervous system, so that the body-mind became like an open cup from toe to crown, a receptacle for His Luminous Infusion. The spine would become erect with this upward-turning response to Beloved Adi Da's "Brightness". Sometimes, the experience of this Bliss was so intense that it felt like the cells of the body were being cracked open.

from The Ruchira Sannyasin Order 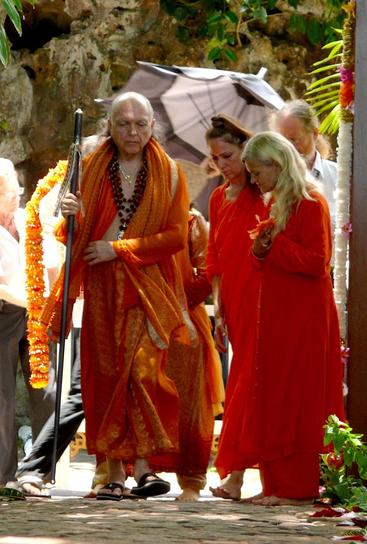 “...the experience of this Bliss was so intense

that it felt like the cells of the body were

The Ruchira Sannyasin Order is the body of Avatar Adi Da's most advanced devotees who have chosen to devote their lives utterly to Him and His Way—by embracing the life of formal renunciation, in the circumstance of perpetual retreat. Avatar Adi Da has designated the Ruchira Sannyasin Order as the senior cultural authority within the gathering of His devotees—both during and after His physical Lifetime.

In early 1998, Avatar Adi Da spent a concentrated period of two months Giving hundreds of hours of Instruction to a small group of devotees. His Discourses during this period, referred to as "The Overnight Revelation Of Conscious Light",

​Then, within this Sphere of "Brightening", Beloved Adi Da would Reveal the Secret of the Non-"Difference" between Consciousness and Energy (or Light). Suddenly, not only Beloved Adi Da, but the room, the objects, the persons, and the entire pattern of arising would appear as a Field of Light and be Recognized as Conscious Light, as Self-Existing and Self-Radiant Consciousness Itself. This is Divine Self-Recognition, the "Open-Eyed" Samadhi of the seventh stage of life. And our Beloved Guru was allowing us a glimpse of That.